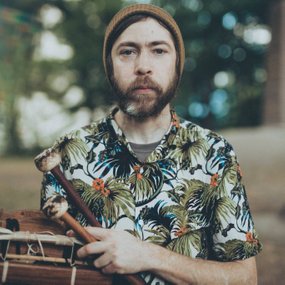 I grew up in a musical home and began to show interest in music from an early age.

When I was seven, I began taking piano lessons, and about a year later I started getting interested in percussion and drums, as well as developing an interrest for African and Caribbean music.

I got my first djembe when I was 9, and a year later, my first drum kit. Around the same time I began playing in my parents' folk rock band "The Wee Malkies" and was also recruited to the local reggae band Ärstin Bärstin, on djembe.

I continued to play with my parents, but it was not until in my early teens that I began to meet like-minded people in my own age. My taste in music developed rapidly in jazz, fusion and experimental rock.

During this time, I began to start my own musical projects, including jazz-rock band O'lacy's Supermix. Thanks to a lot of attention in local media and my contacts among older local musicians, I soon became an unusually young and increasingly busy local music profile.

I also began to regularly travel to Stockholm, where I took drum lessons from the legendary jazz drummer Petur "Island" Östlund and lessons in Afro-Cuban percussion for salsa percussionist Eric "Pygge" Henriksen.

1997-2000 I studied music at Palmcrantzskolan, and during this time I also started getting more and more interested in sound engineering.

After school, I traveled to Sevilla, where I was subjected to the local flamenco scene.

In 2003 I was hired as a full time musician at the local theatre in Jämtland, and stayed there for almost 5 years. Between 2003 and 2007 I was involved in 11 different plays,  as a composer, musician and actor. I also went on tour with 10 of them.

Meanwhile in 2002 I started my own record label Repan Records, and numerous bands and projects, including Congoman Crew, a 17-man musical collective consisting of some of Östersund's foremost young musicians and singers. I began to look more and more at music production, and got my first computer, which sparked my interest in electronically produced music and the DJ culture..

In 2004, I joined Iranian band Abjeez, which I stayed with as drummer and musical co-producer for 10 years.

At the same time I was building up a reputation as a reggae producer, which reached all the way down to Stockholm and I was a called up by one of my old heroes Zilverzurfarn from the shedish group Dag Vag to record drums for his record Howling Dogs & Lost Souls.

In the summer of 2009, I moved to Stockholm to study at the Royal College of Music in Stockholm, where I stayed for 3 years.

After a 2 year break I went back for master studies, where I focused on trying out new ways to play Swedish folk music using African percussion instruments. The studies were finalized in the spring of 2017 with an Exam Concert with some of the greatest names in Swedish Folk and Jazz scene.

In 2016, I started the concert series Klubb Mariama, and in 2018 I launched Jambadon Music and began to dedicate myself to spreading African music through record releases, concerts, workshops etc. I formed the band Wakili and started to travel regularly to Senegal, starting in 2016.

Since I moved to Stockholm, I have worked with many great artists in several genres of music, including Reggae, Hip hop, Folk and World music, Pop, and African Music.

In 2017 I started studying the balafon, and it has become more and more of a trademark instrument for me, despite the  relatively few years I've played it. I have used the balafon with serveral African artists such as Ebo Krdum and Fanta Yayo, but also with Ale Möllers's band and in other experimental contexts.

My 2021 release Afrikalou is a celebration of balafon music, and African music in general,

and it is my first album under my real name.